Second throwback from this years’ OFF Festival.

Interviews at festivals have their own rules, which is why this year we decided to test a new formula on a few selected bands: a lottery, where our interlocutor draws questions from our magic box himself. Only we knew what exactly is contained in this box. It turned out that all four interviews that we conducted in this way were summed up unanimously – “this is fun”! Alexis S.F. Marshall from Daughters found himself also in our tiny research group, because we talked earlier this year in Paris. So, we took our magic box and headed to the press room.

Do you have any strict rules while on the road that helps you go along without any fights?
No, we don’t. We just fight. We probably should implement some rules, that would be beneficial very much for us in a long time survivor but no… we just get mad at each other all the time.

What is the hardest aspect of playing music?
I think for me… it’s been hard since I’ve got kids. Leaving, being away so much time… we FaceTime every day but sometimes it makes it harder. They’re in that age where they’re okay with me being away and they understand. And they are happy when they see me in the phone, but now I get more emotional (laughs). So it’s easier for them, but harder for me.

Gig that you’ve recently went too.
I can’t remember the last time I went to a show. I live in central Pennsylvania right now and there’s nothing going on there. It’s just suburbs. But I’m going to Pittsburg when I go home – my friends from Jay Jayle will be there. So I’m going there!

Name the iconic band that is in your opinion overrated.
Shit… I would say that probably the majority of pop music. People like Beyonce and Lady Gaga and all of that really bad shit… And what is it, mumble rap? Everybody loves it right now. They don’t talk about anything, there’s no lyrics… they just mumble. I don’t think it’s very creative or original. You see all of these pop artist who make tones of money from it and it’s just bullshit. They don’t even write it… There was this product when I was growing up called “Micro Machines”. They were just the miniature cars and things. There was that guy in every commercial that could speak really, really fast. He was a speed talker. So he did the whole Micro Machines commercial speaking very quickly and now he is the part of the appeal that goes with the product. But the two were linked only by the sales pitch. And that’s how I feel about pop stars. Miley Cyrus, Justin Bieber… it seems like a lot of pop stars right now are just like a person that is selling the product, they are not at all responsible for the product and that’s like always associate this guy who is like a speed talker with Micro Machines. But he is just selling the product. He’s not at all responsible for this adorable miniature cars. So… I’m shitting at all the posters right now (laughs).

The biggest fuckup in your career.
Wow. I think that the biggest mistake is more of a gap. I’ve been thinking about it and talking about it a lot lately because I’ve been asked similar questions… I wish I’ve spend more time creating art and music and writing. I wish I have done and record more. Perhaps I would be a better writer and singer at this point, in a different place… I don’t know. But I wish I put more effort more often then I did.

What was the first album that you bought with your own money.
It was either “Theatre od Pain” or “Shout at The Devil” by Mötley Crüe. My brother got me into them when I was a kid. We were talking about Mötley Crüe in the van earlier, how I thought they were really cool when I was young. And there was some kind of revival couple years ago when everybody was like „yeah, Mötley Crüe is a fucking bad-ass rock and roll!” and I was like „This is not good! This is not a good band”. They used to be really cool band, when I was a kid they looked awesome. But looking back… this riffs are really weak. Tommy Lee is a very good drummer but not particularly creative. But you know – they looked cool as fuck. I really liked them. I thought they were awesome.

Are you an expert on something?
No (laughs). Not on anything. I would love to master one thing in my life and I hope at some point say yes and have a proper answer to you. But at this point in my life I have mastered nothing. I’m getting really good at yard work. We moved in this house, so I’m getting a lot of yard work – doing tone of research, pull weeds away from the tree ’cause the tree is getting eaten by vines and shit… so I’ve mastered that! Next time I will have some proper terminology for you.

Album or artist that changed your life.
When I heard Scott Walker’s “Titlt” it really changed what was musical to me. I experienced a lot of noise bands, and I’ve been doing things semi-rytmically. There were a lot of bands in Providence that have been doing a lot of noise, heavy electronic stuff. But Scott Walker was like punching sides of beef! Singing in a very strange voice. Then I’ve learned that he came from The Walkers Brothers – 60’s pop stars band – and that he changed into some kind of musical monster. It really had me reassessing what the limits were. And that there are no limitation really for me as a singer. Scott Walker is pretty remarkable. He’ve done some phenomenal work. 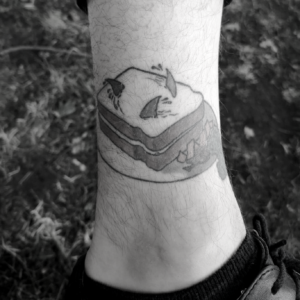 Tell about music that your parents listened too.
My mom listened a lot to pop radio. So in the 80’s there was a lot of cool bands in the radio, like The Cure. But also a lot of bad shit. My mom was never a really big music fan. My dad got me into Arlo Guthrie and Johnny Cash. He likes a lot of americana stuff. But mostly the „white” americana, so I had to find out blues on my own. My brother is 10 years older than me, and he got me into Agnostic Front and Metallica, Mötley Crüe, Alice Cooper. So I was getting a little bit of everything. As I got older I appreciate some classic stuff like Hank Williams. I love it now, but when I was younger and my dad listened to it I thought „my dad is not cool!”.

What is your favorite music video and why?
I don’t know ’bout any newer music videos. My friend Jeremy, he made our „Less Sex” video, he made really good video for band called GLAARE. He did a really great footage for that. When I was young I watched a lot of Headbangers Ball. I fucking loved Mareuder! New York hardcore band. They have this video “Masterkill”. It’s just fucking great. It’s funny but they are deadly serious about what they’re doing.

Music genre that in your opinion is underrated.
Huh. I don’t know about music genres. I think they’re a bit assholes, tending to get in a way of creativity. But I would say that not enough people listen to blues. But guitar-bass kind, I don’t like the piano-harmonica shit. My partner loves BB King and stuff like that, but that doesn’t do anything for me. For me someone like Robert Johnson, just a talented guy with a guitar, it’s just great. I think it’s a very under-appreciated genre.

Pssst… wanna see some Daughters in 2019?