A walk through pain. Interview with Kollaps

Meet Kollaps – the Australian industrial warriors, who were one of the highlights  at this year’s Industrial Festival in Wrocław.

You just got back from the European tour. Can you tell me about your impressions?

Wade Black: This most recent European tour was very different to the previous jaunt in 2017 which was comparatively innocent (but was also a mess in its own right). There was an odd, sort of inescapable darkness that engulfed and consumed the band on this tour and while taking its individual personal tolls we could not help but acknowledge the profound effect that this had on our live shows.

We played our first shows in Austria, Croatia and Sweden and performed in many new cities, made lifelong friends and enemies and made an appearance at Wroclaw Industrial Festival in Poland of which we unanimously agree was a high point.

I’ve never associated Australia with industrial music … maybe with cheerful electronics like The Presets or optimistic indie in the style of Rolling Blackouts Coastal Fever. Can you tell more about the music scene in your area? Bands worth knowing?

Outside of the 1980’s classics such as SPK and JG Thirlwell’s Foetus there isn’t much happening with industrial music in Australia and in fact there is very little interest in it here.  The Australian audience in my experience mostly concerns itself with a sort of faux positivity and is strangely homogenised by a strict sense of moral superiority and a kind of hysterical fear for personal safety; this makes it difficult for Kollaps to exist in our homeland as we’re devoid of these concerns.

In Australia, to be a band with any kind of artistic concept is regarded as pretentious which I find to be much to our cultural detriment as the alternative is to simply be about nothing. My personal experience here is that most judge art only by the value of ‘fun’ one has at an event as opposed to the power or profoundness that the work has on you as a piece of art, even if the effect of a particular work is extremely negative and uncomfortable.

I don’t believe that one should negate its artistic value however this is a very common and disappointing occurrence here. This is personally what I feel explains your association with Australia and cheerful electronic music, it essentially exists to please the banality of the Australian palate.

Do you think that the geographical factor is a big obstacle for you? Is it harder for bands from Australia to break through?

The geographical factor is certainly a significant logistical obstacle for us. The cost of flights alone can be several thousand dollars for one member. After this most recent tour, I came back home less financially destitute than the previous tour in 2017 but paid a heavier price in my personal life; a day off touring in Europe is not spent with family – this is a very real and luxurious possibility for natives to the continent. I hope to relocate to Poland sometime in the New Year to combat many of these issues.

As a DIY band, you are very much committed to PR issues. Your last European tour was very much advertised. Who is dealing with these stuff in your band?

Kollaps, as it currently exists, is completely run administratively by myself and Damian. We’ve had very little help from external sources and we’ve mostly found outsourcing to be a disappointing and costly endeavor. PR, tour booking, writing, producing, artwork, social media, and publicity is all done and dealt with in house.

Why do you harm yourself at almost every concert? To reinforce the message, or is it just a form of entertainment?

To walk through a path of physical pain is conceptually very important to me. I find it to be a empowering display of the facing and conquering of my own depression, to not fear it, and to show the ability to weaponise it against others and by doing so essentially becoming something indestructible.

Simultaneously I believe that it shows to the audience that they are not alone in their suffering and that we’re connected by this in a very personal way. Furthermore, it is intended to be a sincere act that supports the subject matter that the lyrical content deals with, namely life, love, grief, conflict, death and disease. Unfortunately, and much to my disappointment these acts of self-violence are often quickly misconstrued and brushed aside as degeneracy or brutishness. 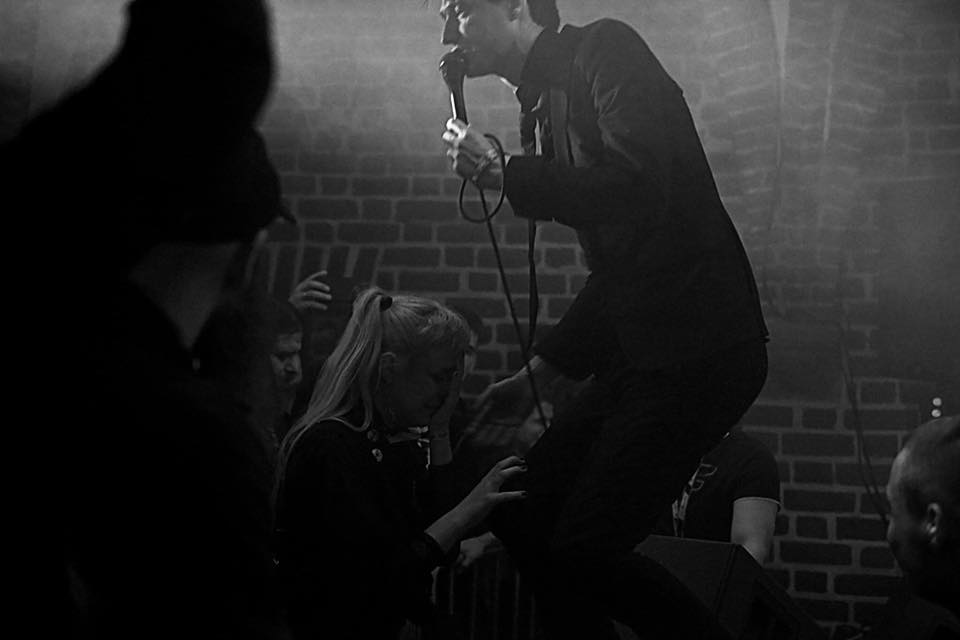 Can you say anything about the upcoming album?

We have a 7 track LP being released in the New Year of 2019 entitled ‘Mechanical Christ’ which will be released via UK based label Cold Spring Records. Also, we will tour extensively for this and will once again return to Europe; and were announced recently as apart of the lineup for Tower Transmissions VIII which will take place in Dresden in September so it is likely that our tour for this record will occur roughly during this period.

The name of your band – Kollaps – comes from Einsturzende Naubauten’s song. Tell me more about your other musical inspirations.

Personally, I’m mostly inspired by bands that are not related to the industrial music in most cases. Currently I feel mostly inspired by and in awe of my friends and peers such as Pharmakon, Operant, Brighter Death Now, Trepaneringsritualen, Puce Mary, Blush Response, etc.

The time of musical summaries has come. Can you name a few albums which in your opinion were the best releases of this year?

OPERANT – Harnessed to Flesh, PUCE MARY – The Drought, IC3PEAK – CKA3KA and TOWNEZ VAN ZANDT – Our Mother The Mountain. It was released in 1969 but I’m adding it here anyway!