This is fun: Editors

We know that doing few interviews a day can be tiring for musicians. So instead off pissing of Justin Lockey and Elliott Williams – both guitarists of Editors – with the same question they hear everytime, we’ve presented them to our little fun, you may know from Off Festival or some other interviews. Rules are simple – we bring a box with tens of questions – some serious, some funny, some stupid and all completely random. You draw one and your partner answers it. See how Justin and Elliott handled it before their show in Warsaw.

Name 5 bands that fans of your music should know.

Justin Lockey: You might have to help me on this one, El. I don’t know, because you can listen to our band and be from many aspects of the canon of rock music. And a little bit of electro music.

Elliott Williams: There are some obvious ones.

What have you learned from everything that you’ve been through in life?

E: To be your true self. It’s the best thing you can do. It’s easy, especially when you’re starting out a band, to get distracted by media or what’s going on or trends at the time. But when you’re getting old, you realise…

J: You just don’t give a fuck when you’re older.

E: Yeah, being your authentic self is the best policy and not trying to chase musical trends. People tend to like because you’re an original and authentic person rather than because you look or sound like someone else.

What was the first album you bought?

J: Yeah, i think it was “Where You Been” by Dinosaur Jr.

E: Mine is definitely not cool. It was Aqua.

E: Do I? I definitely remember hearing… This was before I was in Editors, in my first band, hearing Zane Lowe, who was a big Radio One presenter at the time, playing one of our tracks and it was just most exciting thing ever. If you’re in a band, you always need to get some sort of validation and hearing Zane was something like this. I remember watching Justin for the first time on TV in his old band Yourcodenameis:milo. They used to be on MTV2. They looked pretty cool…

J: Yeah, we were pretty cool back then.

E: And at the same time Editors were on TV as well. It was a great time for music television. And what about you?
J: First time I’ve ever heard myself on the radio was when we did a Peel Session. That was the third show of a band and it was a Peel Session. Actually we did two Peel Sessions and it was lovely. He used to ring me up in between doing those sessions and tell me to keep doing what I’m doing which is the weirdest thing ever. I think we were last or second to last band that did the Peel Session before he died. Yeah, we’ve recorded the session and he died two days later.
E: And I remember the first time when we joined Editors and “Ton Of Love” was played by Zane Lowe. That was pretty exciting time for all of us, because it felt real.

Music genre that is underrated in your opinion.

E: Is that underrated though?

J: Yeah, to me. When was the last time I’ve had a chat with anyone about any of these things? Because it’s all about fuckin’ Soundcloud rappers with tattoos on their face, man.

What music reminds you of your childhood?

J: I know your answer to this.

E: Yeah, it’s Michael Jackson. He really reminds me of my childhood. There are some other things, like Blur and all britpop which was so incredibly inescapable in England… Green Day as well. What about you?

E: You’ve got brothers though.

J: Yeah, I’ve got two older brothers so I had a great record collection while growing up.

The biggest fuckup in your career.

E: I know this straight from the top of my head. Hammersmith…

J: Yeah, the biggest technical fuckup of our career. It was a London headline show and the PA pretty much blew up midway through. It was irreconcilable. Fuckin’ horrendous. It strikes fear into me just thinking about it now. A big room full of people.

E: They didn’t have a good time.

J: They had a shit time. But not as shit time as we had.

E: We kept coming off and people were trying to fix it. Then we’d go back, play half a song and it would happen again. So we come off again… At some point people were just booing.

J: Yeah, you just go have a drink and go to sleep after something like this. 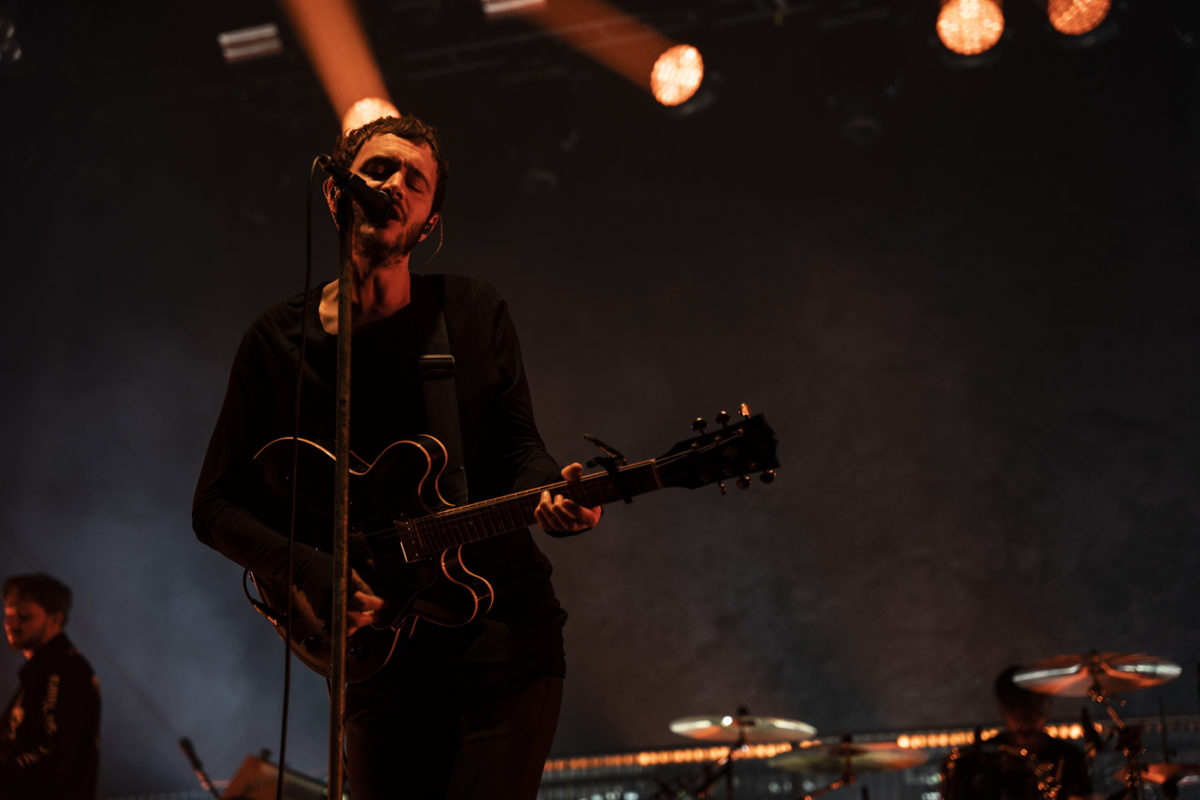 What’s your best advice for staying inspired while writing music.

E: For me it’s trying to discover new music and new genres that I didn’t necessarily like… I’ve got heavily into electronic music in my twenties. I took the same path as finding bands and finding record labels. The whole cycle of discovering bands really inspires me to then go and do something myself. The same as you get into jazz music – there’s a whole world to discover. Music can always lead you on a path. I was into Green Day when I grew up and then other punk bands and it leads you to Nirvana at some point, then Pixies, Daniel Johnston… There are so many avenues, music can open up. And it seems like an endless well.

And what’s your latest discovery?

E: Soundtracks at the moment. There’s a film that just came out. I didn’t see it – he did. It’s called “Uncut Gems”.

E: Yeah, few people recommended the soundtrack to me and I’ve been listening to it for the last few days. It’s really good. What about you?

J: I just went back and did the whole 60’s thing. Gone back to being obsessed with The Beatles which you have to do every few years. Early Beatles are shit though. Terrible. But there’s a song called “Don’t Let Me Down”. It was one of the last songs they’ve ever played live on the rooftop gig. It’s probably on my top 3 songs of all time.

What band is in your opinion overrated?

E: We have these discussions quite a lot. For me it’s Queens Of The Stone Age.

J: I can totally see that.

E: I like what they’re doing. I just don’t get it on the level when it’s that godly status. It’s subjective though, isn’t it? I’m sure there are people who think that we are terribly overrated.

E: If Josh Homme tells me to fuck off, I’d be like “yeah, fair deuce, man, your band is fucking overrated”.

Do you have any tattoos?

J: Actually we’re probably the only tattooless band in the history of rock n’ roll.

E: We sometimes get really fuckin’ drunk. And when we were in LA, if we’d only find a shop, we would have tattoos.

What would it be?

E: A little Jolly Roger tattoo that we’ve talked about for years. There’s something cool in not having any tattoos.

J: Especially when you play rock festivals and every single band is walking around fully sleeved up. We’re not.

Looking back at your body of work, what do you think your greatest legacy is or what you hope it would be?

E: Legacy is such a strange thing, isn’t it? We’ve always wanted to be in a band like R.E.M. or The Cure. That all the people in the next generation would discover our band the same as I discovered those bands as a kid. They’d get into the whole catalogue of music, that’s different and shows different aspects of the band. With The Cure you can get into that really early, dark post-punk thing or the more 80s pop moments. And we always wanted to be in a band that’s a part of journey and exist overtime.

E: We’re getting there. When you start out, no-one wants to be in a band for twenty years right now. It’s not cool anymore.

J: Everyone wants to be in the best band in the world.

E: And we want to be in a band for twenty years.

J: And be the best in the world. (laughs)

What is the hardest aspect of being in a band?

J: Travelling. No, travelling on a bus. I don’t travel on a bus. I travel on my own, so I don’t travel with the rest of the band. I see them at venues everyday and then I go off to the wide world and travel, drive myself. Or get a train like in last two days. Or fly. Whatever. Literally the hardest thing for me to do is to be on a bus. Fuck buses. I mean, their bus is lovely. It’s like a hotel on wheels…

J: It doesn’t matter what kind of Playstation is there. I’m still gonna hate the bus.

What is the thing you fight about the most on the road?

E: The five of us get along really well and we don’t have very big egos. You learn that when someone has a really shit day or is pissed off, you just leave them alone and not constantly poke. We don’t fight and we don’t take ourselves seriously. We are trying to have a good time.

What is the most beautiful place in the world?

J: Oh, I’ll tell you. There’s few places. There’s a place called The Dingle in Ireland. The highlands of Scotland. There’s a little cafe on the top of the Alps when you go between Italy and Switzerland. You can sit there and have a little cup of tea and look essentially at the top of the world. And above all that – Yorkshire.

What’s your favorite thing to do with your friends?

J: What do you do with your friends?

J: Eat sushi and pan-asian fusion food. And make techno music… Or you do that on your own?

E: I do that on my own. Yeah, just socializing. And when I socialize I just go and get fucked up.

J: The opposite of what I do.

If you could tell your high school aged self a one thing, what would it be?

J: Probably “always take the stairs”. It has two meanings – a) I’ve been trapped in the lift before and it’s fuckin’ horrible. And b) – you don’t put as much weight on if you always take the stairs. Fitness and safety. Oh, and don’t smoke too much weed between the ages of 16 and 25. There’s a long list of shit. I’d be there for like two days being like “don’t do this and definitely don’t do this”. Oh, and learn a guitar left-handed, so I won’t play it wrong handed like I do now. I could be so much better musician if I’d play it the other way around. Oh, or learn the cello. So many things!

E: Enjoy things as they happen and don’t take yourself too seriously.

J: Everyone should be told that when starting a band, ever. Because there’s so many fuckin’ serious bands around. We’re seen as serious. Look at that fuckin’ picture (points to a tour poster) – we’re serious. On all our pictures we look serious. We’re in no way serious.